We have added a Sanitary Meter option, 84CS to our 84C family of vortex flowmeters, which is part Schneider Electric’s EcoStruxure Process Instrumentation.

Why a Sanitary 84C option for Vortex?

– Only 3A approved vortex meter in the market
– Unique Shedder design provides best-in class accuracy (±0.5% liquids,
±1.0% gas & steam)
– Available with Sanitary, Quick-disconnect end connections
– For Clean-In-Place (CIP) and Sterilize-In-Process (SIP) at temperatures up to 350°F / 177°C
– The 84CS is an extension of the 84C Series and replaces the 84S model

What about the other Vortex 84CS feature releases and where can I get them?

– The 84C vortex flow meter and all its features can be ordered
through BuyAutomation.com
– The DTM Easy Configuration Wizard is a simple 7-step process to
configure any Schneider Electric vortex meter for either HART 7 or
Modbus communication.
– The Configuration Personalities are pre-configurations that simplify
(or limit) menu settings and measurements for specific application
via the DTM or local display. Three personalities are being
featured for any of our Vortex meters: Oil & Gas, Steam and
General.
– The Time-in Service feature shows the days the vortex meter has been
in service and is useful for scheduling maintenance service. 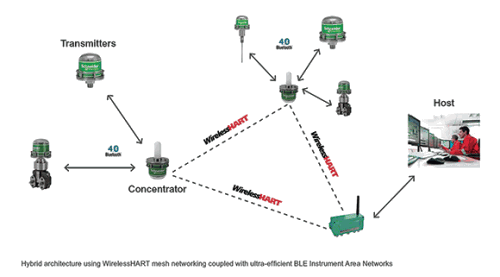 The Instrument Area Network (IAN) has been developed by Schneider Electric as a cost-efficient and flexible industrial wireless network as an alternative to more costly systems. Bluetooth communication between the field sensors and data collectors saves battery life and makes the network flexible and easy to install, giving users a cost-effective solution.

By choosing Bluetooth between the field sensors and collectors, the batteries of the field sensors last longer than with a complete WirelessHART system. Local configuration is also easier to do with an app for a phone or tablet, using Wi-Fi. This makes Schneider Electric’s Instrument Area Network a cost-effective, user-friendly and flexible wireless system.

Gauge pressure measurement: the WAP10 absolute or gauge pressure sensors measure the pressure of various industrial processes and transmit them wirelessly to a central collector (WCC10). This sends the values from multiple sensors via WirelessHART to any central system. There are versions with pressure ranges up to 2,1 bar. The field sensors are explosion-proof with ATEX certification.

Temperature measurement: there are RTD and thermocouple versions from -200°C to 885°C, with various insertion lengths between 50 and 400 mm. Optionally, thermowells in various lengths can be supplied. The field sensors are explosion-proof according to ATEX 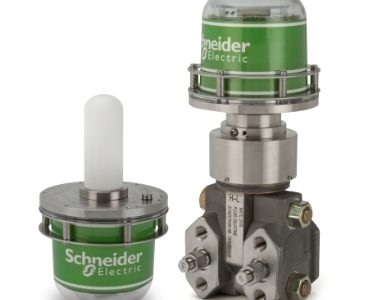 Schneider Electric’s Instrumentation Area Network – the lowest cost and easiest to use wireless solution with the longest battery life that does not compromise performance.

“PRiSM’s new alert management workflow functions are key for a truly scalable and comprehensive monitoring program in fleet-wide implementations with a large number of assets,” said Bill Bielke, Avantis PRiSM product manager at Schneider Electric. “Users need to easily identify and differentiate between new, ongoing, and worsening anomalous conditions. Our alert management workflow streamlines this process, allowing engineers and analysts to focus their time on the alerts and events that could have a significant impact on equipment reliability and operations.”
PRiSM uses a proprietary algorithm, machine learning and advanced pattern recognition to identify and alert on subtle changes in equipment behavior for early warning notification and diagnosis of asset health and performance problems. The software has the proven ability to alert plant personnel of asset failures days, weeks or months before problems occur, leading to increased equipment reliability and reduced unplanned downtime.
Avantis PRiSM predictive asset analytics software is part of Schneider Electric’s expanding software business for power, oil and gas, mining and other process industries. 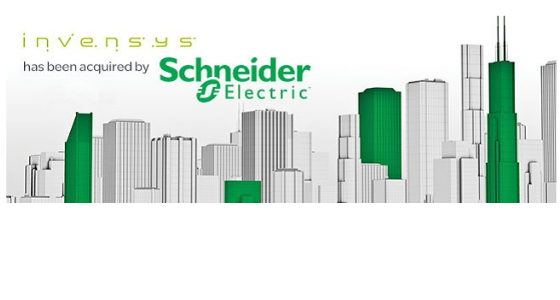 JANUARY 17, 2014 / RUEIL-MALMAISON, FRANCE – Schneider Electric announces today that it has completed its acquisition of Invensys plc, a global automation player with a large installed base and a strong software presence.

With this acquisition, Schneider Electric is significantly enhancing its position as a provider of efficiency solutions integrating power and automation. The transaction will allow the combined entity to have a unique position in industrial and infrastructure end-markets.

Jean-Pascal Tricoire, Chairman and CEO of Schneider Electric, commented: “We are delighted to announce the completion of the acquisition of Invensys and warmly welcome the teams joining us. With Invensys, Schneider Electric will reinforce its industrial automation capabilities, boost its positions in key energy-intensive segments and strengthen its software offering. Together, we will create substantial value for our customers, shareholders and employees.”

“Invensys brings proven capabilities in process automation technologies that are very complementary with those of Schneider Electric’s Industry business” said Clemens Blum, Executive Vice-President of the Industry business of Schneider Electric. “We are now in a position to offer to both our customers and those of Invensys a unique value proposition in terms of segment know-how, technologies and geographic footprint.”

Information regarding the issuance of New Schneider Electric shares

Information regarding the Mix and Match Elections

Accordingly, pursuant to the terms of the Scheme, Scheme Shareholders who made valid Cash Elections have had such elections satisfied in full and will receive 502 pence per Scheme Share.

Scheme Shareholders who made valid Share Elections have had such elections scaled down on a pro rata basis by approximately 96.34 per cent. and will receive 0.1002262076 of a New Schneider Electric Share per Scheme Share in respect of a Share Election that has been satisfied in full.

Scheme Shareholders will receive the basic offer consideration, which is 372 pence in cash and 0.025955 of a New Schneider Electric Share, per Scheme Share in respect of the balance of their Scheme Shares on which a Share Election has not been satisfied in full or for which no valid election under the Mix and Match Facility has been made.

Capitalised terms used but not defined in this announcement have the meanings set out in the scheme document dated 10 September 2013 sent or made available to Invensys shareholders on 12 September 2013.